It appears everyone is making their own greenhouses! The unique, mismatch but oh-so-perfect lego-like match of window and door frames to create a greenhouse has got me all heart-eyes! Unfortunately I don’t have the space to make my own, but I have been wanting to find a solution for having a little indoor greenhouse.

Greenhouses are great for tropical plants, general plant growth and also for delicate, young plants and cuttings. The sheltered environment is usually high in humidity (which most plants love) and the glass walls make them warmer which promotes growth.

In a quest to find a way to make my own unique greenhouse, I stumbled upon the idea of using photo frames! They’re a great option that doesn’t involve having to cut glass, use power tools or hardwoods.

Originally I was aiming for a pitched roof style, but that makes joining the roof to the walls of this greenhouse a little tricky. I though about some other styles and settled on a sloping roof – the perfect mid-century modern greenhouse. 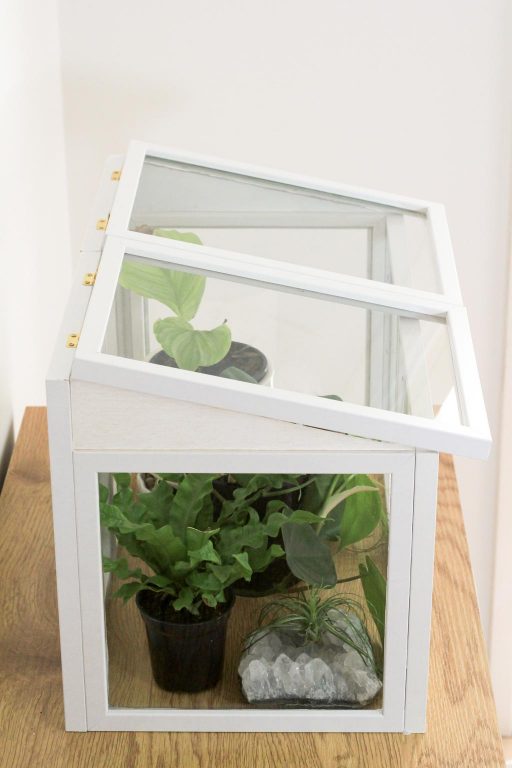 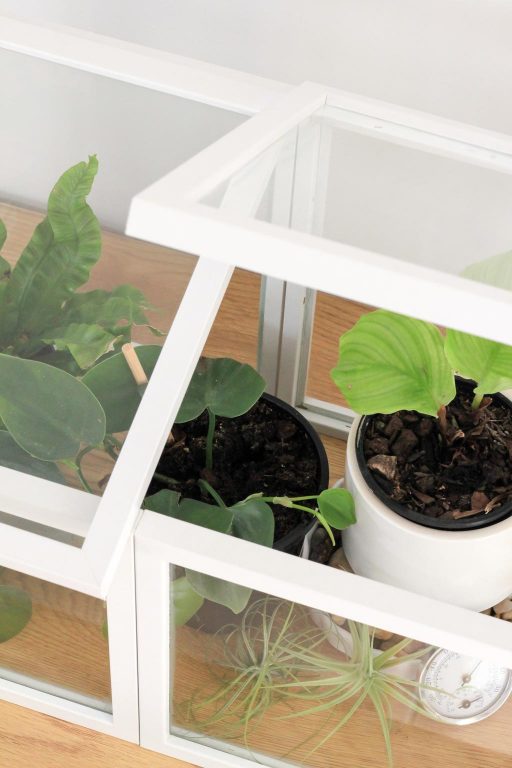 How to Make a Mid-Century Modern Greenhouse from Photo Frames

As a note, you can make your mid-century modern greenhouse any size you want. The important thing is to get two sizes of photo frames that both have the same width. This will ensure the sides and roof will line up. My frames had a width of 8″, one with a height of 8″ (a square frame) and one with a height of 10″.

Also keep in mind that frames are generally advertised for the size photo they’ll display, not their actual dimensions! I found it helped to go in-store so I could lay out and visualise how they’d look. I got my frames from Kmart. A place that has a bunch of different sized frames in the same style (like Kmart or dollar stores) is probably your best bet. 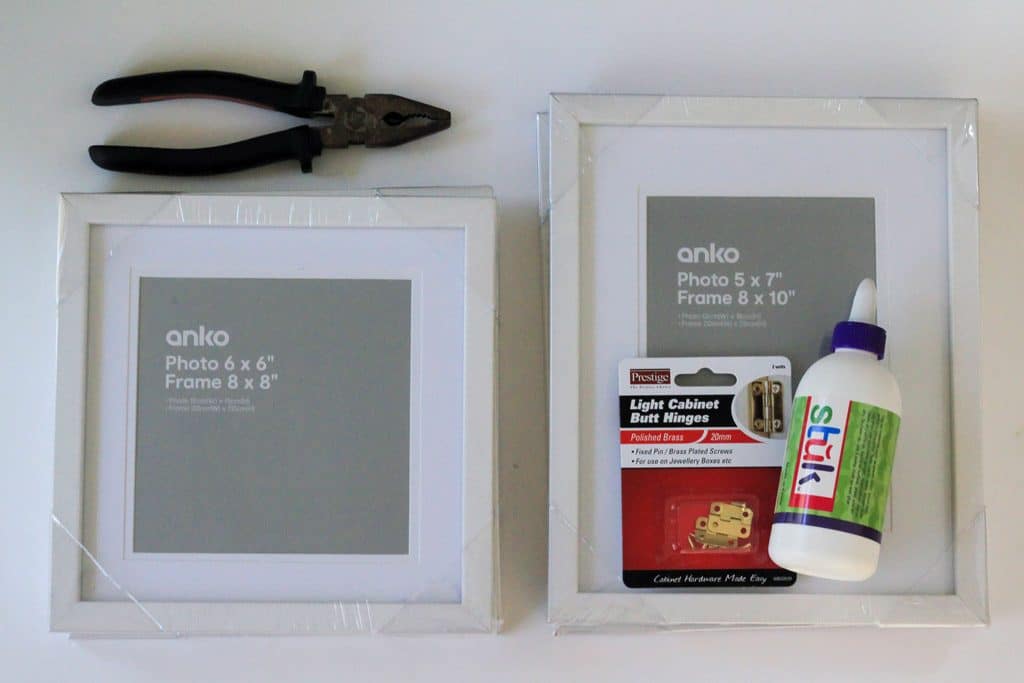 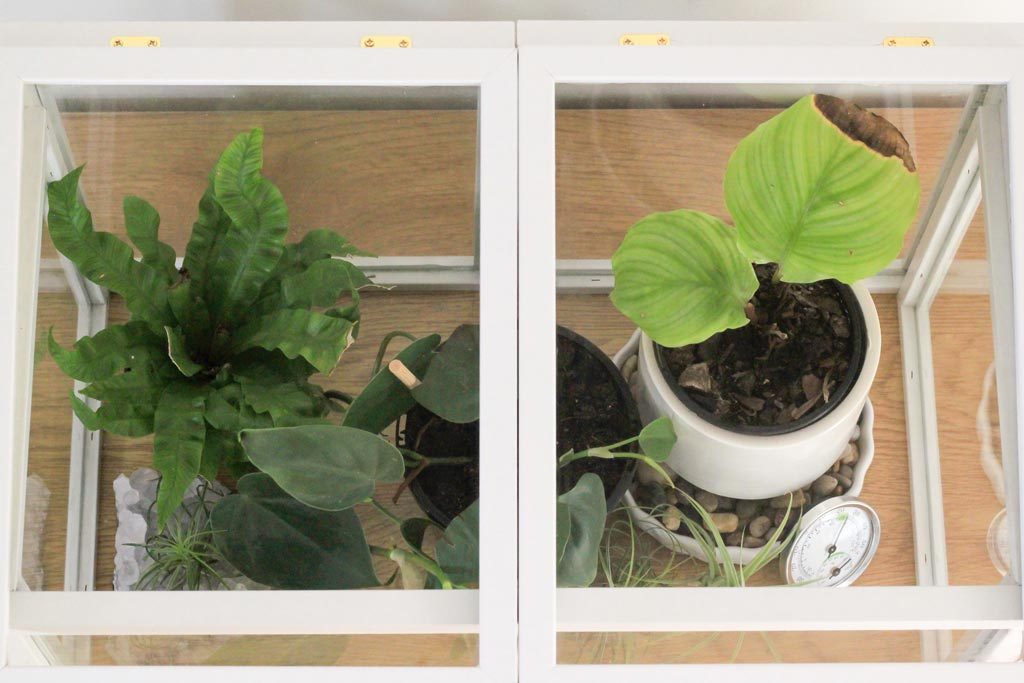 Start by taking the backing off the frames and carefully setting the glass aside. We’ll build the frame of the greenhouse and then add in the glass panels later.

Use pliers to pry out the metal tabs from the photo frames. They should come out fairly easily with a little wiggle. 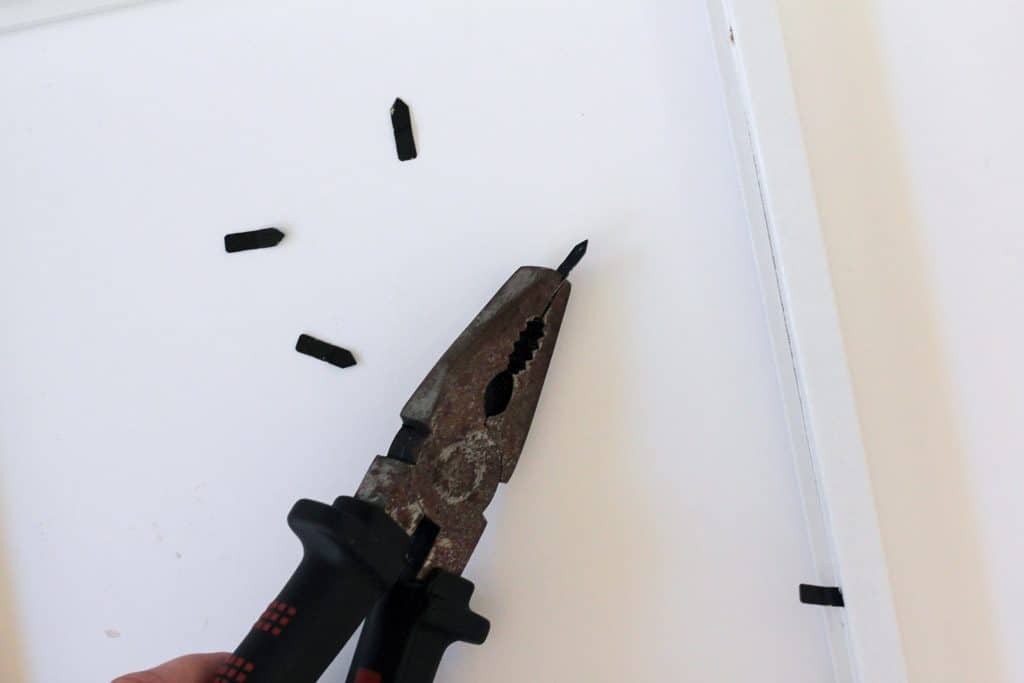 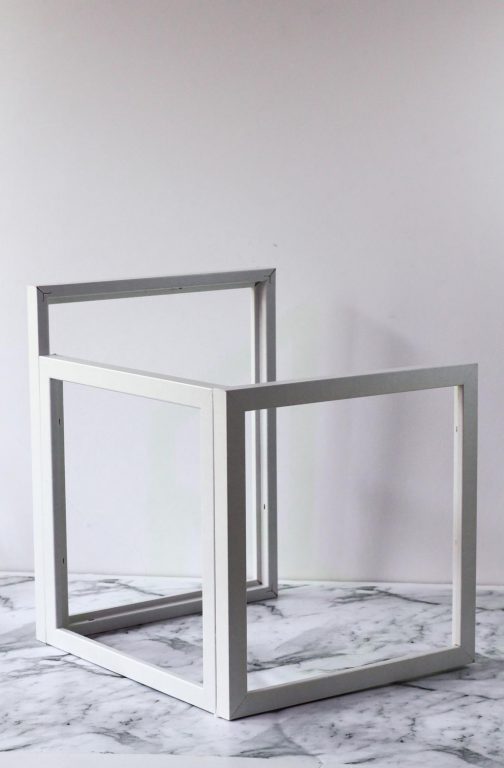 To attach a roof, use a pen to mark out on the top side of the 8×10″ frame where your hinges will go. I then used a nail to make a small hole in the frame, which made it easier to put the screws in the hinge just using a manual screwdriver.

Once two sets of hinges are in the top of the frame, line up the other 8×10″ frame and mark where the hinges line up. Repeat the nail & screw process to attach the frame that will act as a roof.

The roof should hang over one side and be able to be lifted up to be vertical. 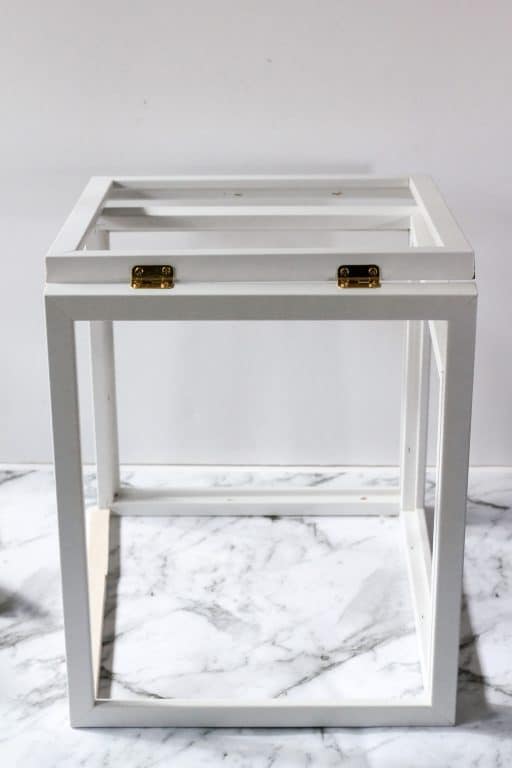 Repeat the above steps again to make the other half of the mid-century modern greenhouse. I ended up leaving the two halves seperate to make them easier to move around. You can push the two halves together to create your greenhouse, without putting too much stress on the glued frames.

Because of this, you may want to add a piece of dowel to help stop the sides from bending more than they should. The dowel should run front-to-back of the greenhouse, and be the same width as the 8×8″ frames to keep it square.

Begin to glue in the glass panels from the inside using a strong-hold glue around the edges. You may need to prop them up until they dry in place.

Measure out the triangle-shaped gap above the front and back of the greenhouse. I used the thin, wooden photo frame backing to cut out a triangle that can fill this gap.

Spray-paint it white and run glue along the bottom and side edges of the triangle to attach it into the space.

Your mid-century modern greenhouse is complete! 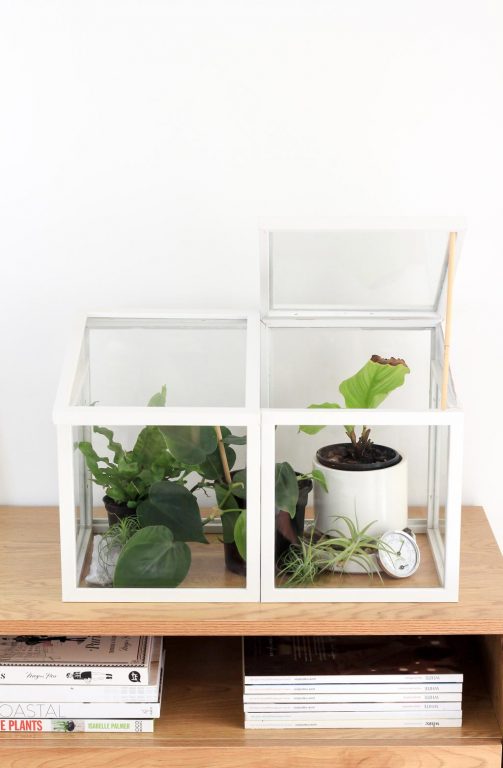 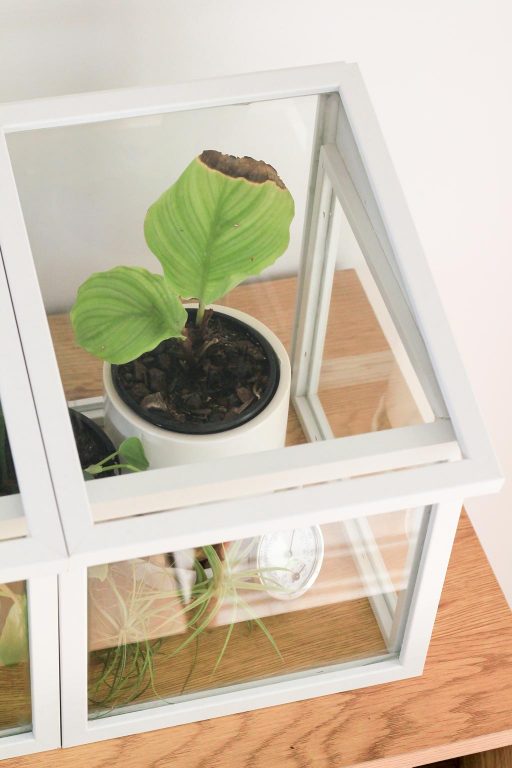 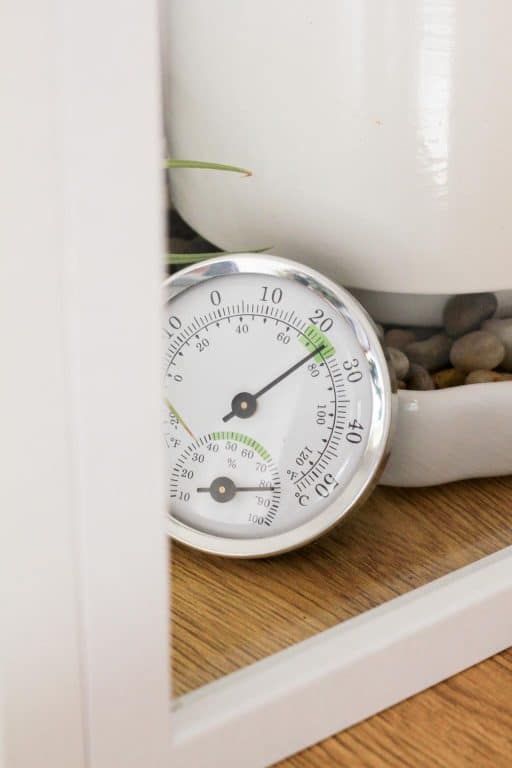 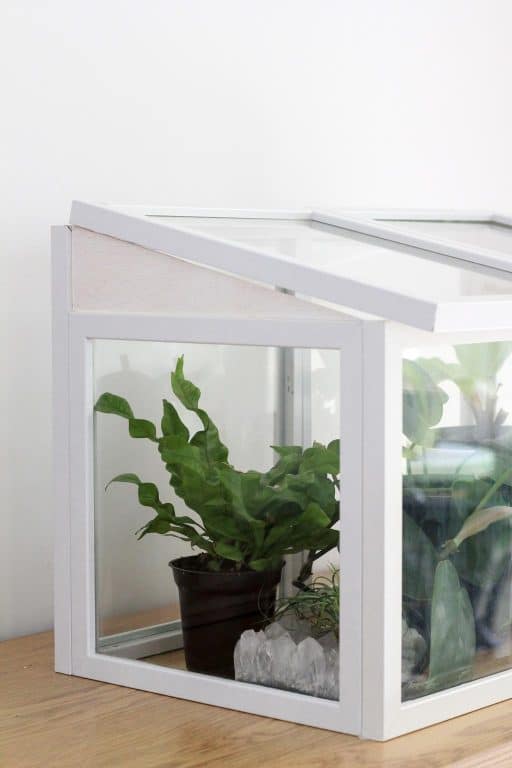 What do you think of this mini mid-century modern greenhouse? I’m loving it! So far, my Calathea Orbifolia is already producing two new buds after just a couple of weeks in the greenhouse.

I use a hygrometer to measure the humidity, which is over 20% higher inside the greenhouse – great for tropicals!

If you’re looking for more ideas, awhile ago I made this DIY mini greenhouse out of balsa wood and transparency paper. 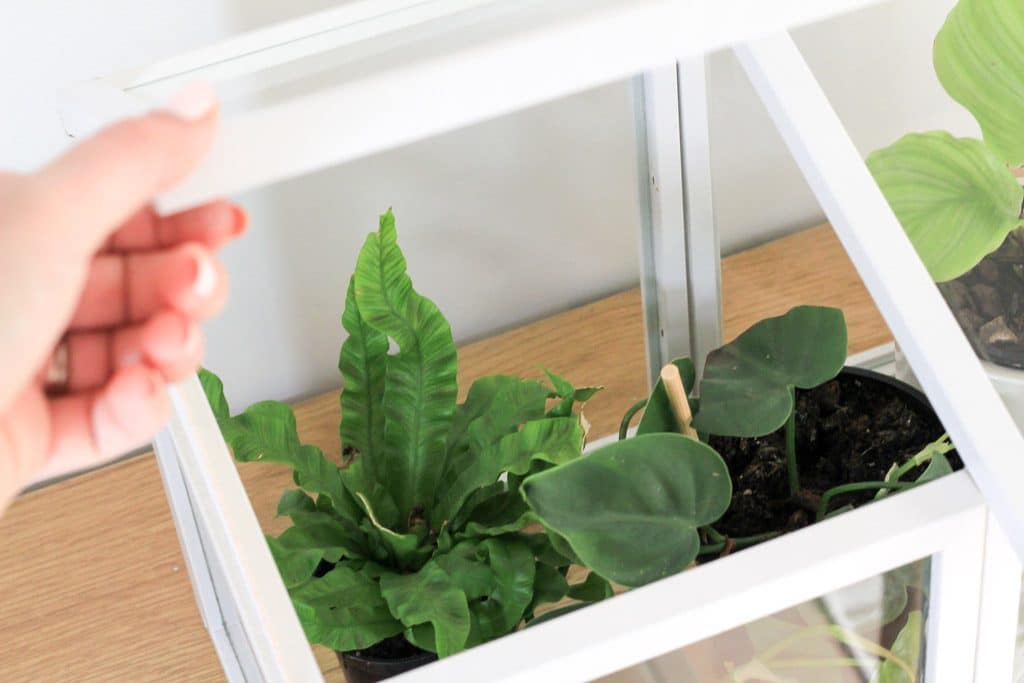 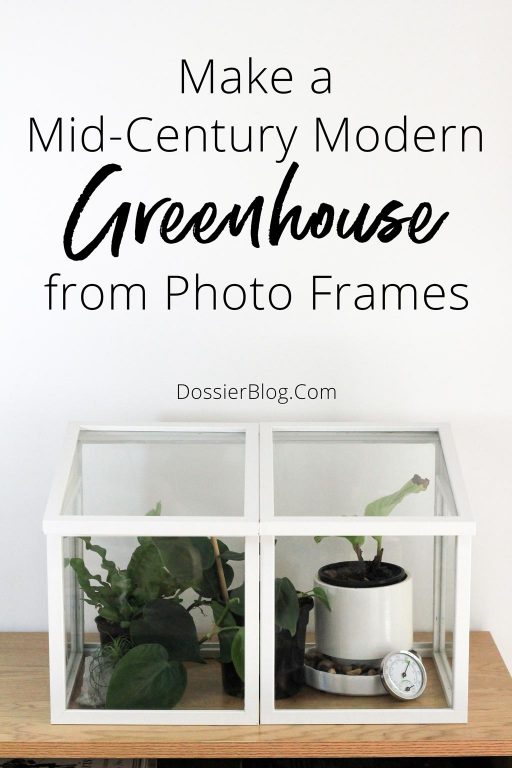 Emily Connetthttps://www.dossierblog.com/
Dossier Blog is a collection of notes on indoor plants, gardening, home & DIYs. Follow Emily on Instagram (@dossierblog) to stay up to date!
Next Post
How to Care for your Fiddle Leaf Fig in Winter
Previous Post
8 Signs your Houseplants Need More Light & What To Do
Related Posts 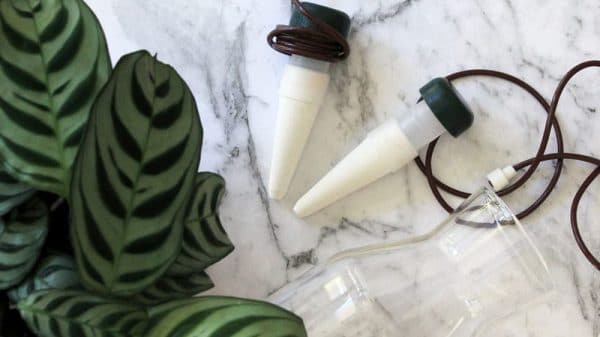 How to Water Your Plants on Vacation 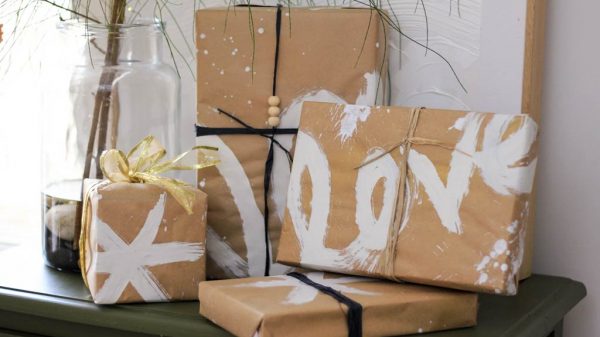