Recently I tried my hand at the propagation method called Air Layering on my Fiddle Leaf Fig!

Below is a rundown of what exactly is air layering, the full method I used and a few FAQs to help you if you’re wanting to give it a go yourself. Read on the the full tutorial and the results I had! 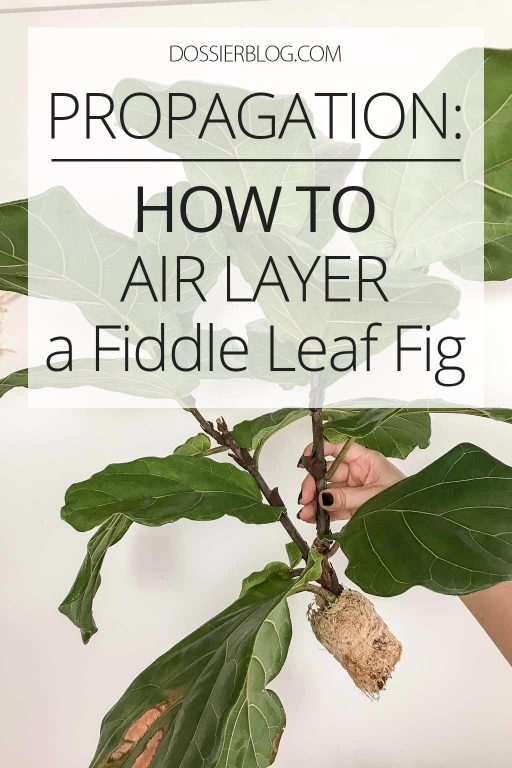 What is Air Layering?

Air layering is a method of propagation which allows a cutting to grow its own root system while still attached to the mother plant. Only once the branch has its own roots is the cutting pruned off & planted by itself. It’s a successful way to propagate large sections of a plant with less risk of the cutting dying during the process!

Air layering is a more intermediate method of propagation, but don’t let that stop you from trying it! Read the tutorial below and give it a go.

The soil & water propagation methods are great beginner ways to try your hand at propagating plants. But they’re most successful when taking small cuttings from a plant.

When it comes to Fiddle Leafs, propagating a cutting larger than 6″ long or that has more than 3-4 leaves attached is often unsuccessful. This is because the cutting is using so much energy just to keep itself alive, it has no energy to grow new roots!

If you’re wanting to propagate a large section of a plant, such as a branch, air layering is the best method to use. It’s kind of like propagating in reverse! The cutting grows its own root system before it’s pruned off, so that it’s survival is more successful once it is pruned. 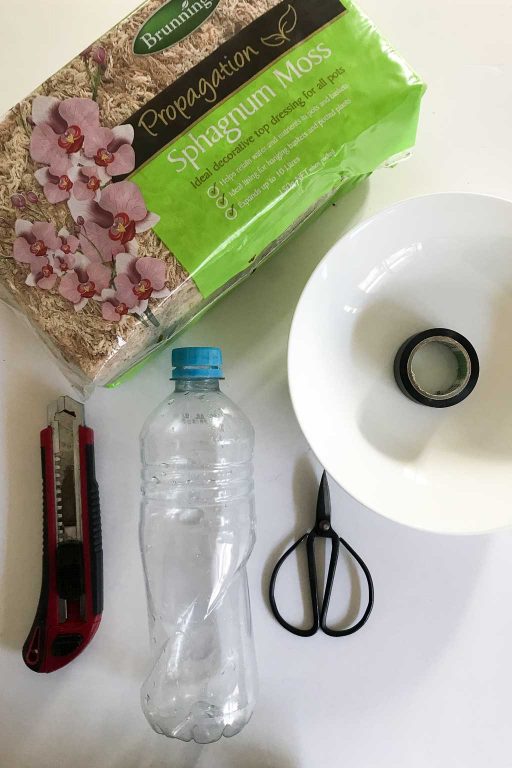 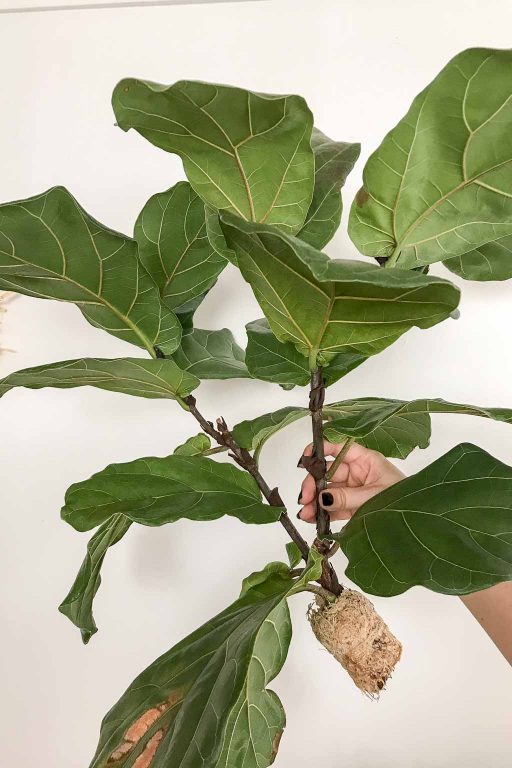 Dampen a bunch of sphagnum moss and squeeze out excess water. The moss will expand when wet and needs to be damp for air layering, but doesn’t need to be saturated.

Cut the top and bottom off a plastic bottle, and slice down the middle so that it can be opened up. The bottle will need to cover a section of stem at least 4″ long, so you may need to adjust how long the bottle is during the process. 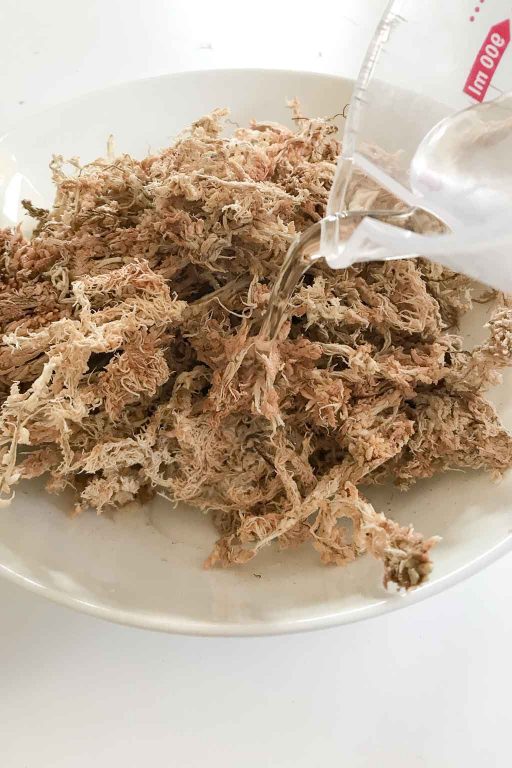 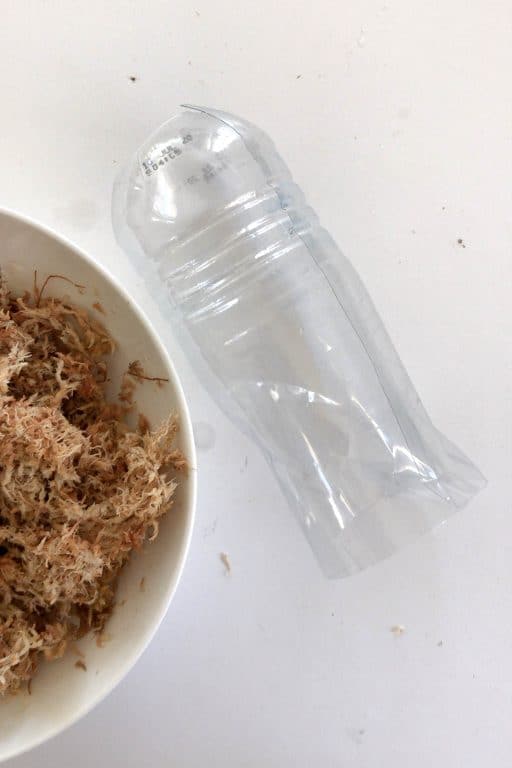 METHOD: How to Air Layer a Fiddle Leaf Fig

Pick a section of woody, mature stem on the plant. You’ll need a section of branch (or trunk) that’s at least 4″ long. You can always remove a few leaves to create an ideal spot if needed.

Take a knife and begin to cut into the bark horizontally. Do this in two places, about 2″ apart.

You’ll also need to make sure that there’s a node in the section you’re cutting out. A node can be identified by a slight bump or ring around the plant. Nodes are where new growth comes from and are also located where leaves meet the stem. 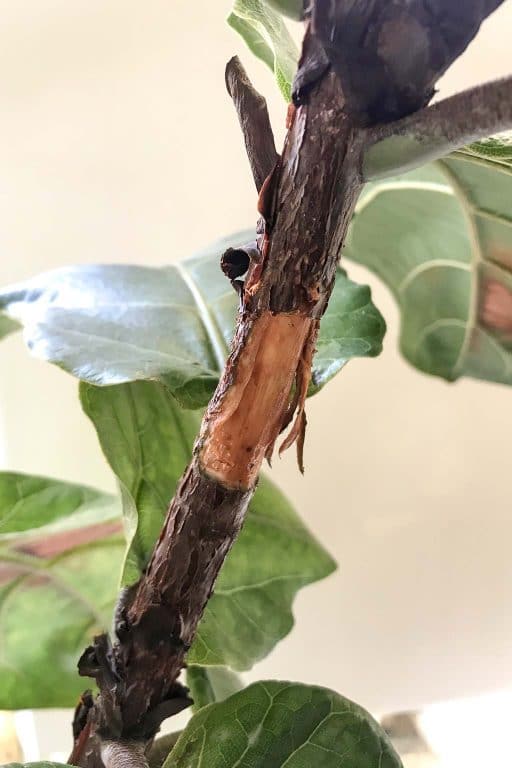 You’ll want to remove a section of bark on the plant by carefully slicing the knife upwards behind the bark layer. It’s normal for some sap to come out during this process. Watch your fingers!

Now it’s time to pack the area with damp sphagnum moss. The more moss you are able to add to the area, the more space roots will have to grow. So for best results, aim to cover around the branch in moss for at least 4″ long. 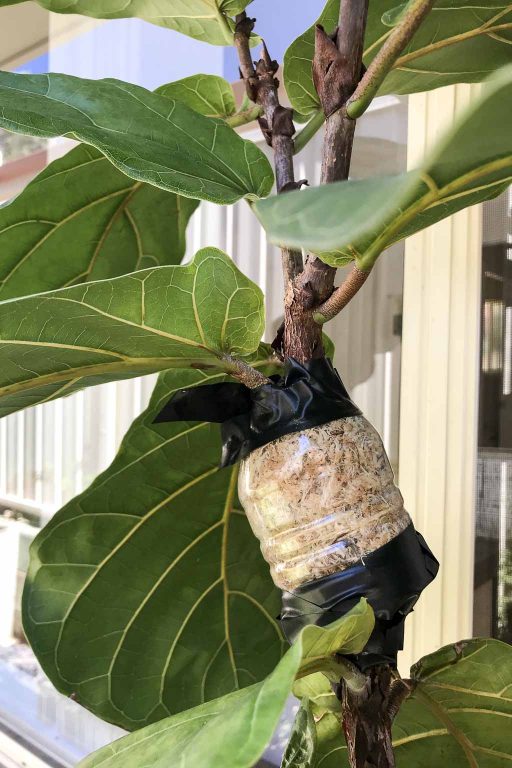 You may need an extra set of hands as you do this to help hold the moss in place! Then, take the plastic bottle and wrap it around your moss covered section. Begin to tape up the bottle, adding any extra moss where there’s space to.

Make sure that the bottle is sealed around the trunk at the top, bottom and along where it was cut. Now it’s time to wait for roots to grow!

Aim to not open up the air layered section until it’s ready to prune (around six weeks). In the meantime, keep an eye on it to ensure it doesn’t dry out. You’ll know it’s still damp if there’s moisture bubbles on the inside of the plastic bottle.

If you’re worried that the moss has dried out, carefully open up the top and spray some water inside. Be sure not to over do it (the moss just needs to be damp, not saturated!) 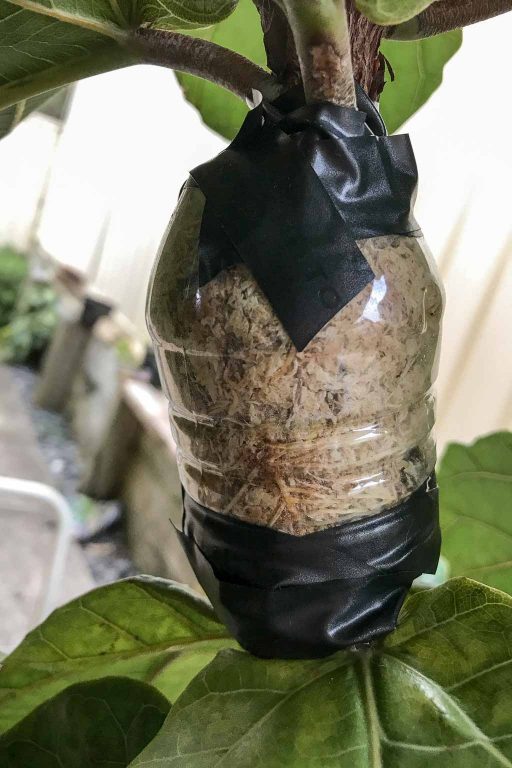 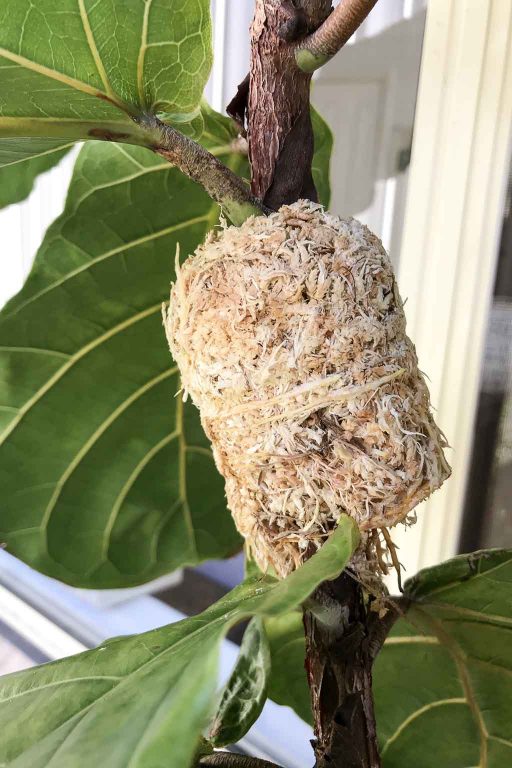 Aim to wait around six weeks before opening up the bottle to check on the roots. I couldn’t see any action happening until just a few days before the six week mark (see above photos), so don’t worry if you haven’t spotted any roots through the plastic.

Carefully unwrap and remove the bottle, paying attention not to disturb the moss and roots. My air layered section had roots starting to push out the top, bottom and around the middle of the moss, so it was definitely a success and ready to plant!

You’ll need to make a judgement call on whether you think there’s enough roots to sustain the section of plant you’re cutting off. If you can’t see many or are unsure, it may be best to wait an extra couple of weeks. 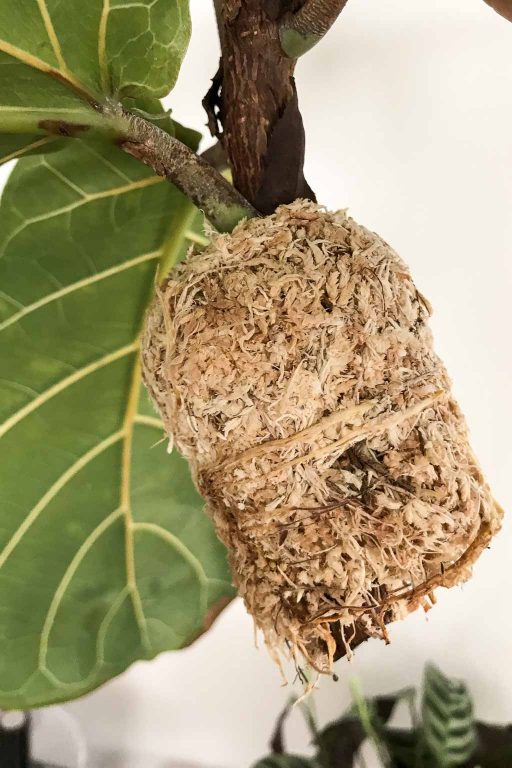 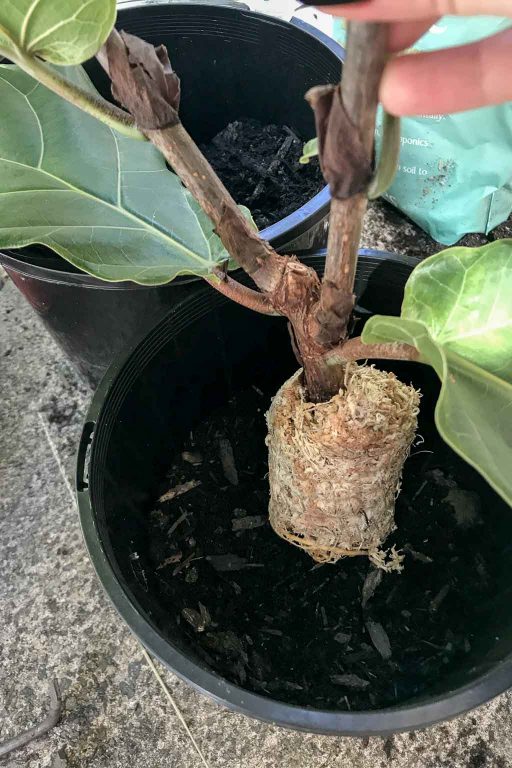 If your air layered branch has lots of roots, its ready to cut & plant on its own! Prune the branch just below the air layered section on an angle.

In the process of potting, it’s best not to disturb the moss and new, delicate root system. Simply backfill the soil around the moss and roots, and water the whole pot thoroughly. Fiddle Leafs prefer a well-draining soil mix. Read my post on Fiddle Leaf soil & repotting for more info!

Your cutting may need some support until its root system really expands out, so you may need to add a stake to it. Keep a close eye on your cutting for the next month or so while it settles in, and make sure the soil doesn’t dry out. It’s best to place it in a similar environment to what it’s used to – I placed mine next to the mother plant. 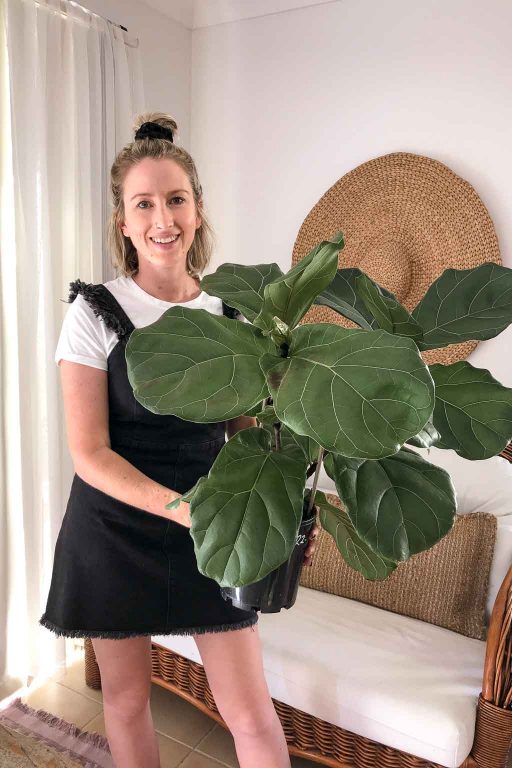 Can I just use plastic wrap or plastic sheeting instead of a bottle?

I would recommend using a bottle instead of other types of plastic. Plastic is porous, and because the moss needs to stay damp for at least six weeks, it’s important there is a tight seal on the air layered section.

When I opened the bottle up after six weeks, the moss was barely damp! So anything less than a bottle may not keep the moss damp enough for long enough. If the moss dries out, any roots will die.

Should I open up the air layered section a few weeks in to check?

I was tempted to do this (mostly out of curiosity) but decided against it. The less disturbance there is to the moss and any roots that might be growing, the better! The plastic bottle also enabled me to see that there were moisture bubbles underneath so I knew there was no need to open it up to check things.

What will happen to the mother plant?

The mother plant will remain largely unaffected by the process. Once the air layered section is pruned off, the plant will act the same as it would if it had been pruned as normal. Pruning does activate buds that become branches, so you can expect some branching to happen on the main plant. More info on branching here.

What should I do if there’s no roots after six weeks?

It’s time to troubleshoot. Was the moss damp enough when opened up? If it was dry, the bottle probably wasn’t sealed properly, resulting in no roots being able to grow in a dry environment.

If there’s only a few roots, the air layering process may just need a few extra weeks. Spray the moss damp with a spray bottle and seal it back up, paying attention not to disturb the moss & roots.

For general tips and help on caring for Fiddle Leaf Figs, make sure you download the free Grower’s Guide on this page!

Emily Connetthttps://www.dossierblog.com/
Dossier Blog is a collection of notes on indoor plants, gardening, home & DIYs. Follow Emily on Instagram (@dossierblog) to stay up to date!
Next Post
How to Make a Worm Farm
Previous Post
How to Get Rid of Fungus Gnats for Indoor Plants
Related Posts 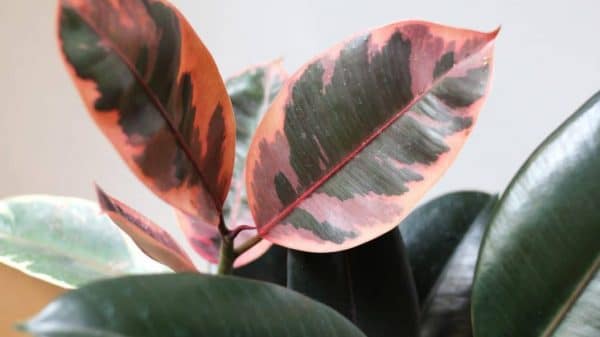 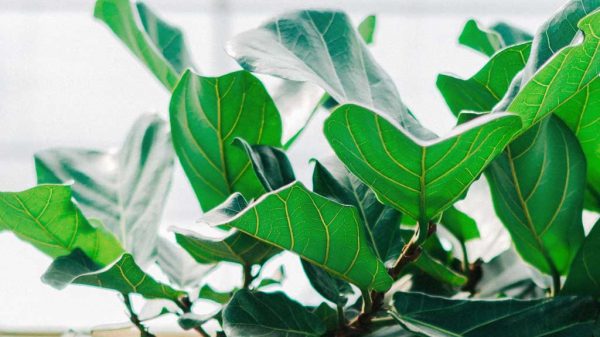