In the north of Israel lies the region of the Galilee, possibly most well known as the place where Jesus spent most of his ministry years. At the centre of the region is the Sea of Galilee, also known as the Kinneret, which is more of a freshwater lake that lies about 215 metres below sea level. The main town in the area is Tiberias on the western coast of the lake. This is where we stayed and is a hub for people visiting the area and traveling out to see sites.

Descending into the Galilee region is an experience in itself! We caught the bus from Haifa to Tiberias, which takes you over the hills and down into the valley towards the lake. Its one of the best views you’ll get of the Galilee region and is simply breathtaking when seeing it for the first time! Being below sea level, hills surround the lake on all sides. The Galilee has a calm about it that is almost unexplainable – it is definitely a unique place in Israel and the world. We managed to see quite a few sites by researching bus timetables and maps and also by walking. Don’t miss these sites if you’re planning on visiting the Galilee!

Sites to see around Galilee

Jordan River baptismal site (Yardenit)
At the southern end of the Sea of Galilee near Kibbutz Kinneret is Yardenit, a baptismal site on the Jordan River, which represents the place where Jesus got baptised by John the Baptist. We caught a bus from Tiberias to the turnoff and then had a short walk to the site. Unfortunately there doesn’t seem to be access to the Jordan River unless you go through this site, but fortunately there is no entry fee. If you would like to be baptised in the Jordan there is a fee for the white baptismal gowns (I think they were compulsory for entering the water). There were a few different tour groups here when we visited and the area was peaceful and people were singing. The water is an amazing emerald green colour! We put our feet in the water but there were so many catfish and other things swimming around, we didn’t want to go too deep. There are also lots of souvenirs and food is available here. 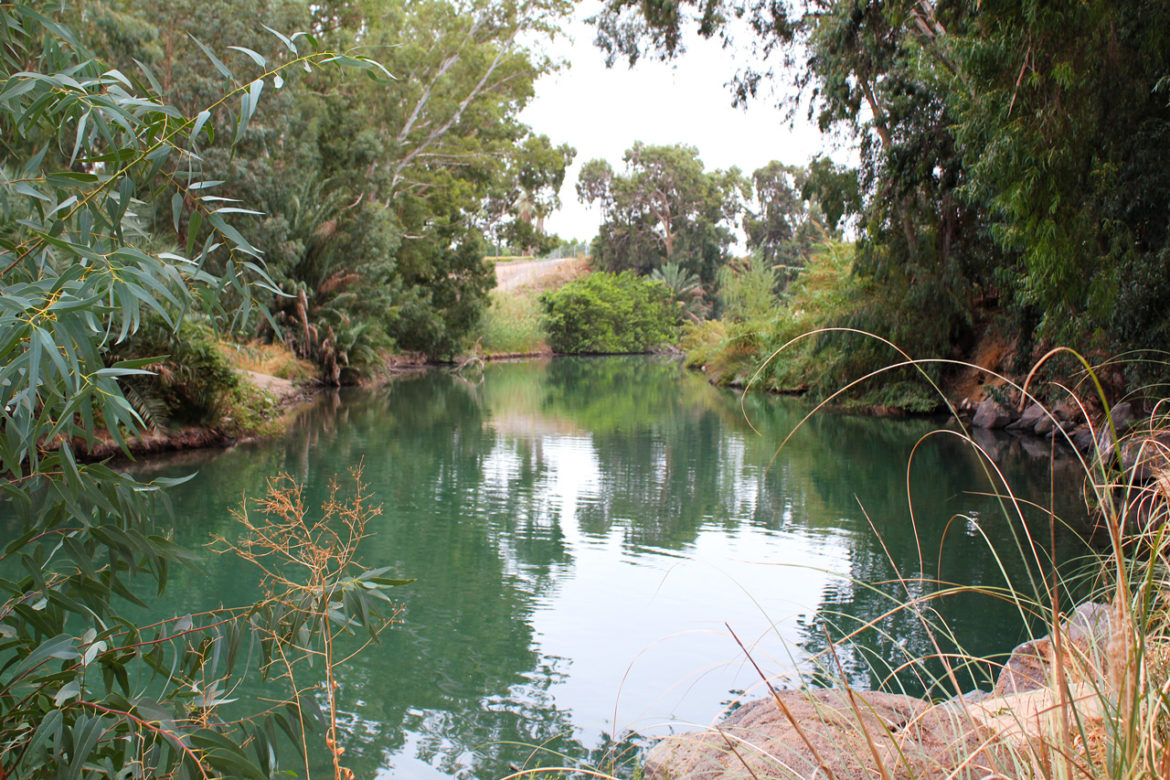 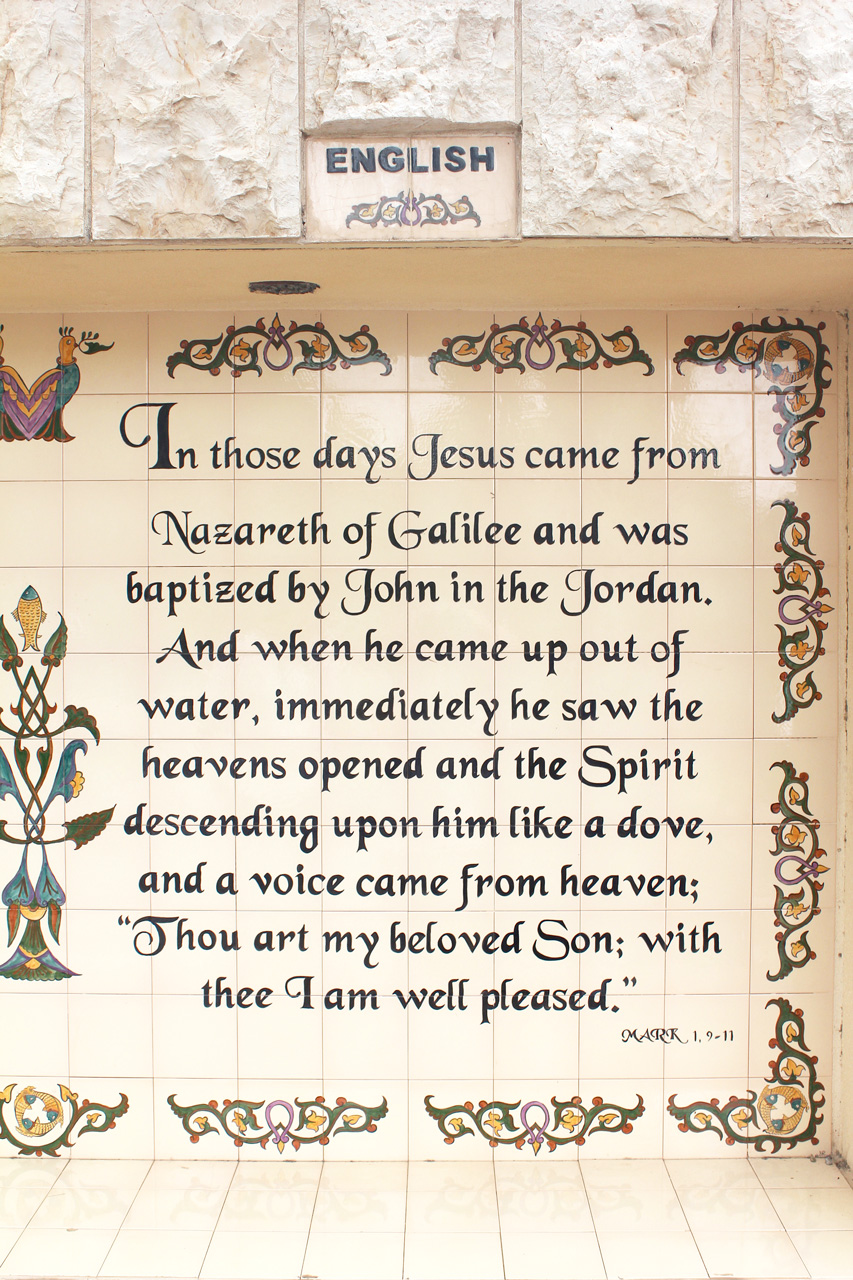 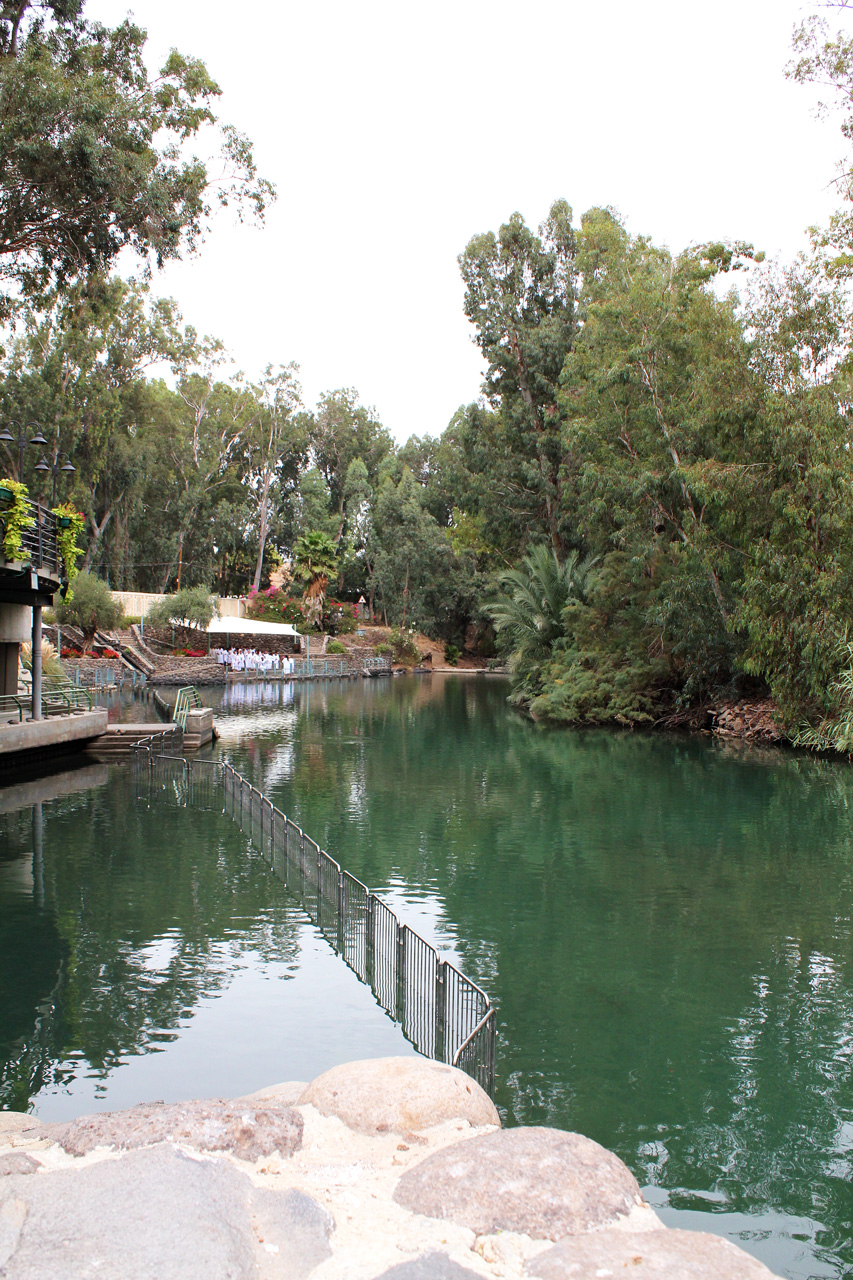 We caught the 28 bus from the main street of Tiberias to the site, but be careful as there are about three bus stops on the street about a hundred metres away from each other, and different bus routes stop at different stops. You can check to make sure you’re at the right stop by seeing if your bus number is on the bus stop sign.

Mount of Beatitudes
We caught the bus north (450 and 541 both work – see the Israel buses site) from the central bus station to the turnoff to the Mount of Beatitudes and had a bit of a walk to the site. The mount looks out from the north and gives great views over the Sea of Galilee. It is here that Jesus gave his sermon on the mount and the eight beatitudes found in Matthew chapter 5 of the Bible. There are multiple sites for services that groups can hold there and the grounds are vibrant and green. The church is beautiful but the dresscode to enter is very strict, unfortunately we couldn’t go in as we were both wearing shorts. There is also a souvenir shop and kiosk here but not much else to do, its quite remote. 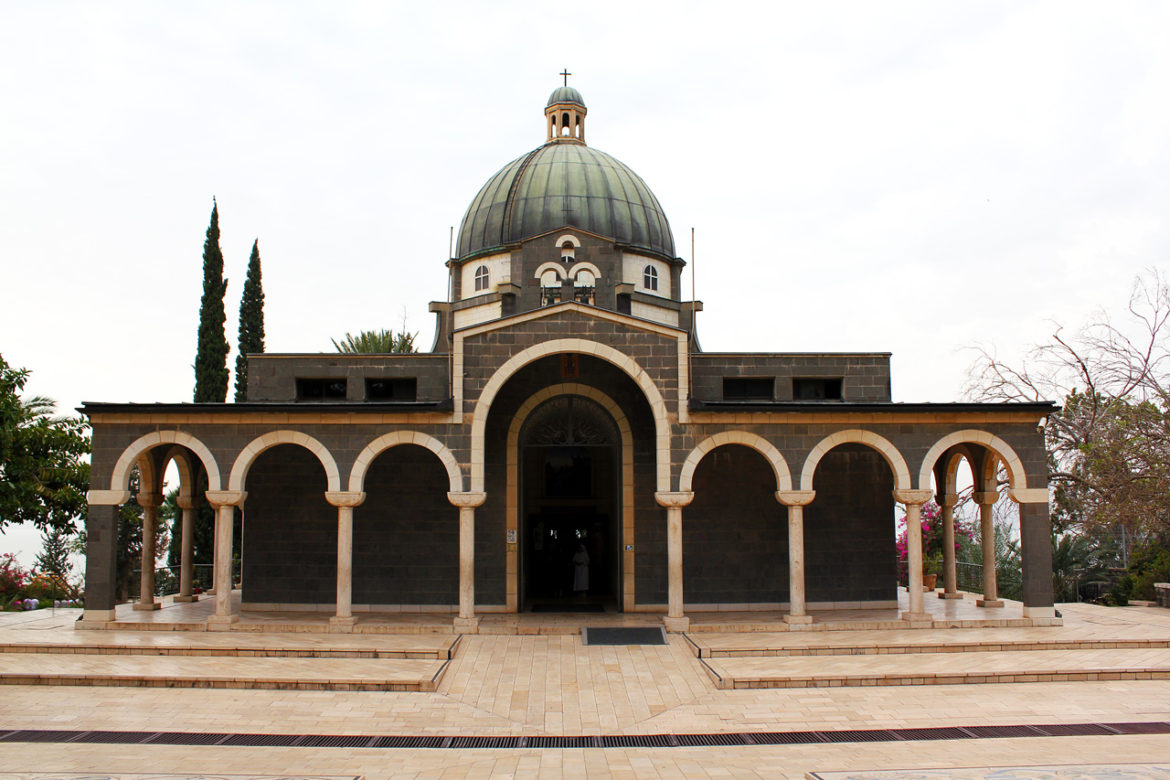 Capernaum (Capharnaum) – The Town of Jesus
From the Mount of Beatitudes we walked down the hill to Capernaum, the town of Jesus. We took a shortcut by making a left onto a gravel/dirt road immediately outside the entrance gate of the Mount of Beatitudes, which took us straight down the hill and gave us great views (with no one else around!). Once we reached the bottom of the hill, we simply crossed over the road and continued on the footpath walking east until we reached Capernaum. Here there is the site of Peter’s house, an old synagogue and more. 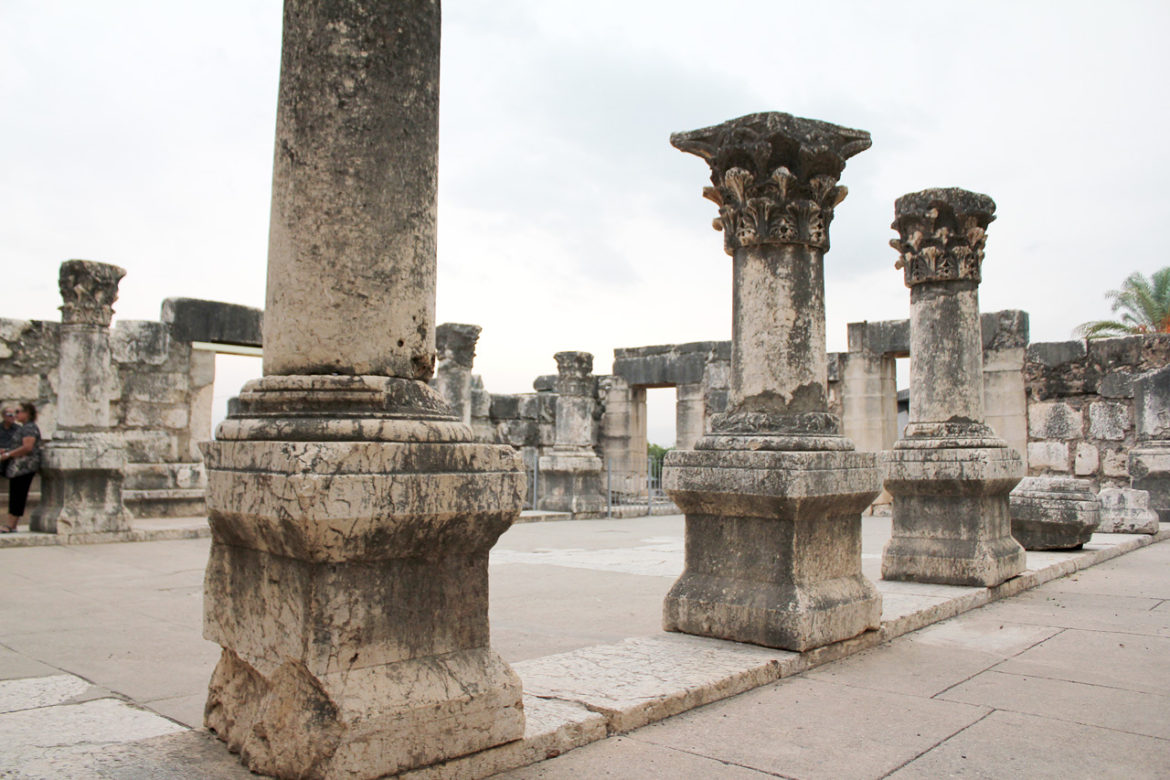 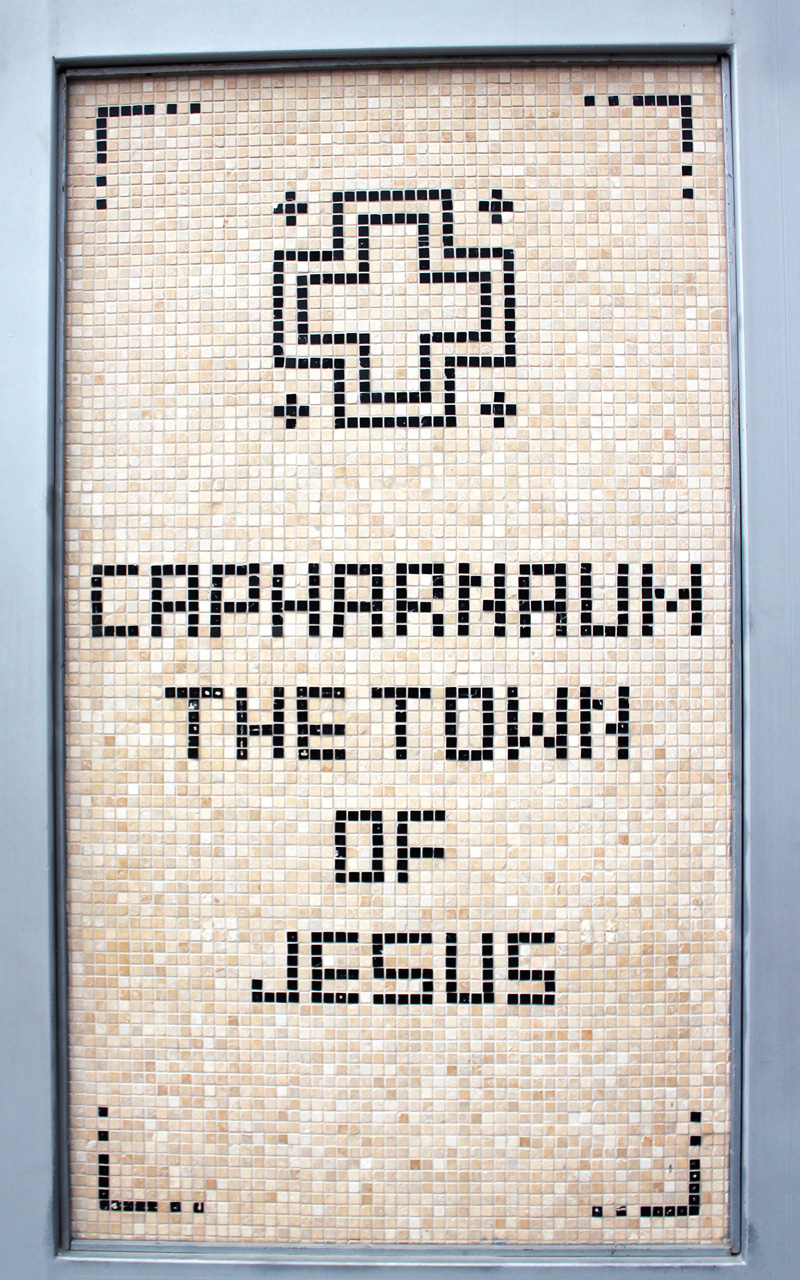 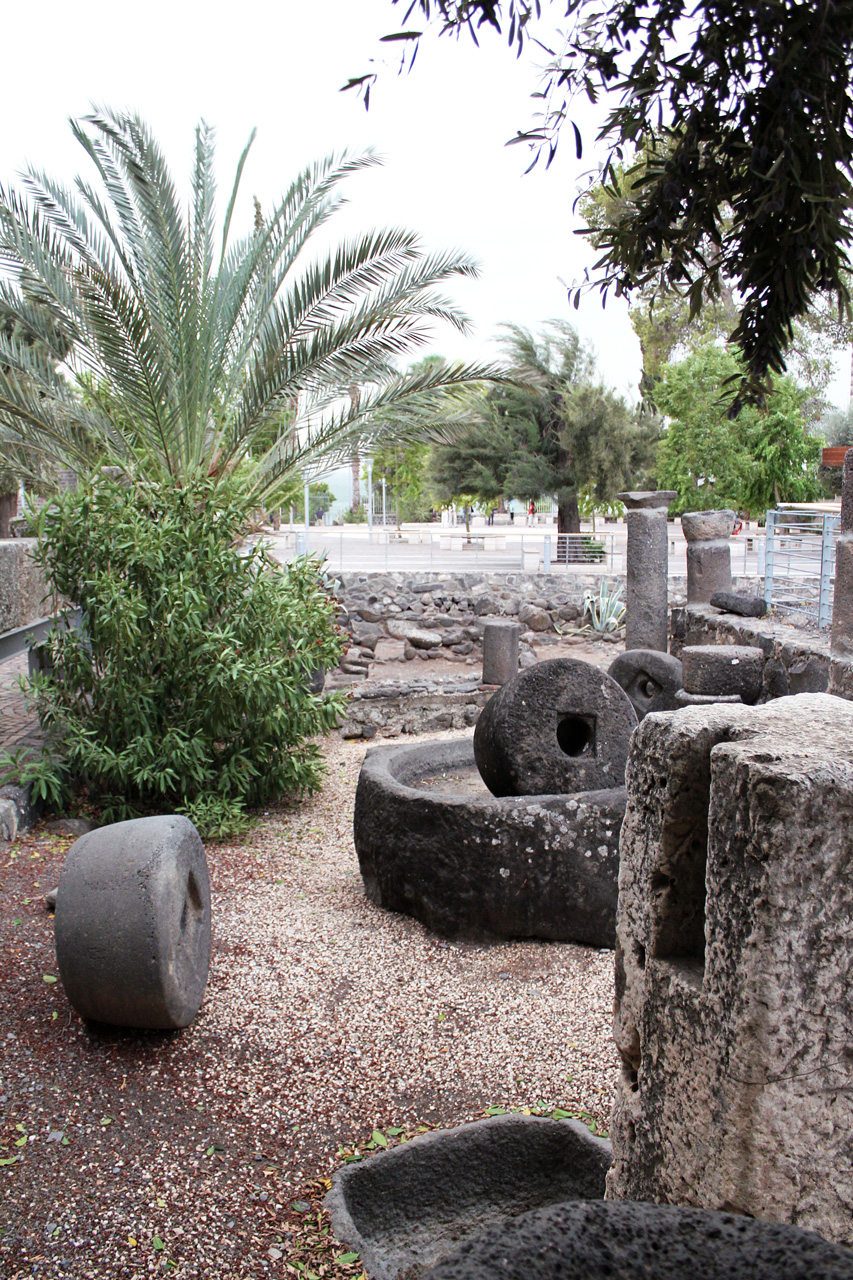 For some reason I pictured Capernaum being a real town today, but it is a gated national park site of the town from Jesus’ day. Again there is a dress code but the staff had a scarf they gave me so I could enter. It was a 3 shekel fee to enter. As we were walking to Capernaum, a storm whipped up over the lake in a matter of about 30 minutes. It got so windy it was dangerous, so we didn’t spend long in the site as they had to close. It was crazy to think that this was what it must have been like when the disciples were in a boat with Jesus on the lake, scared for their lives in what seemed like an insta-storm! We took shelter at the little food kiosk while sheets of tin were ripped off the roof in the wind. Fortunately we found a private Sherut to take us to our next stop. 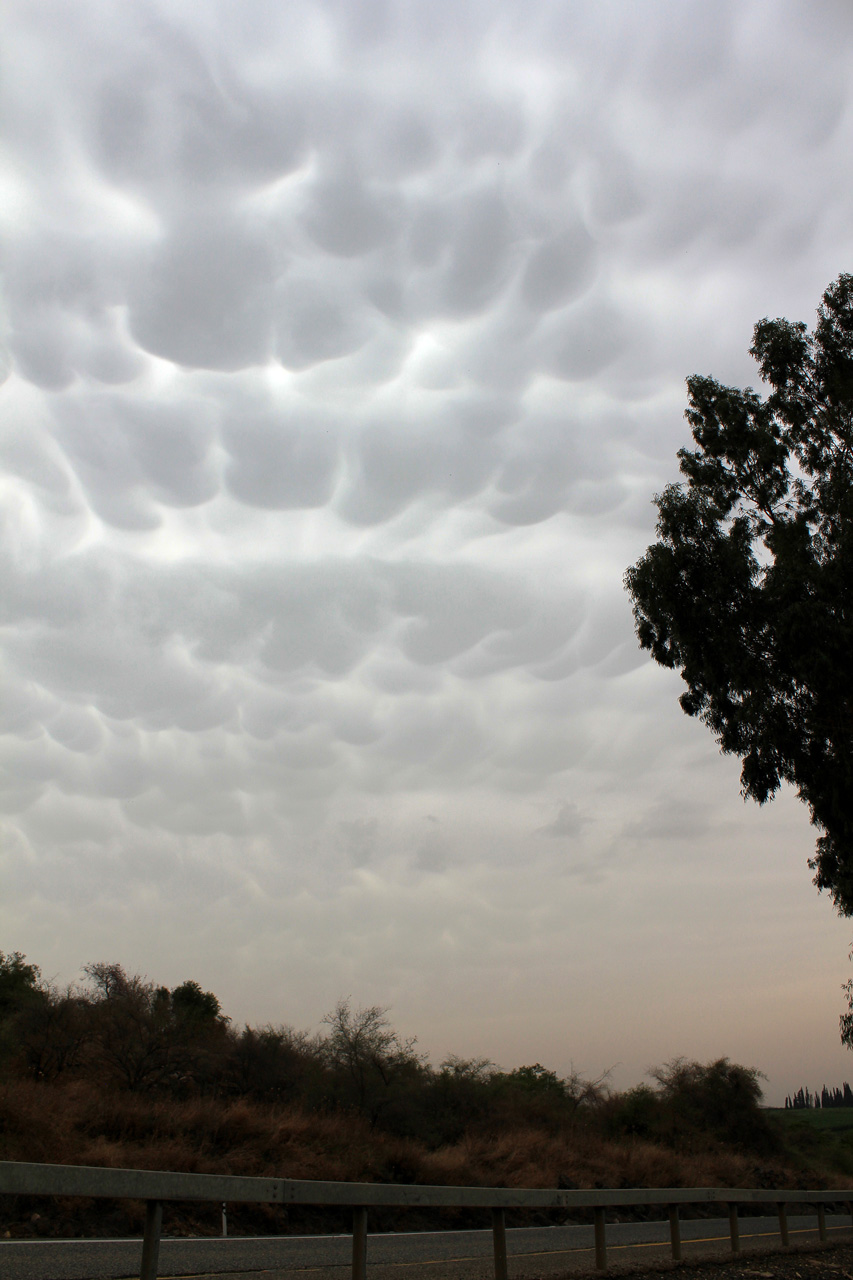 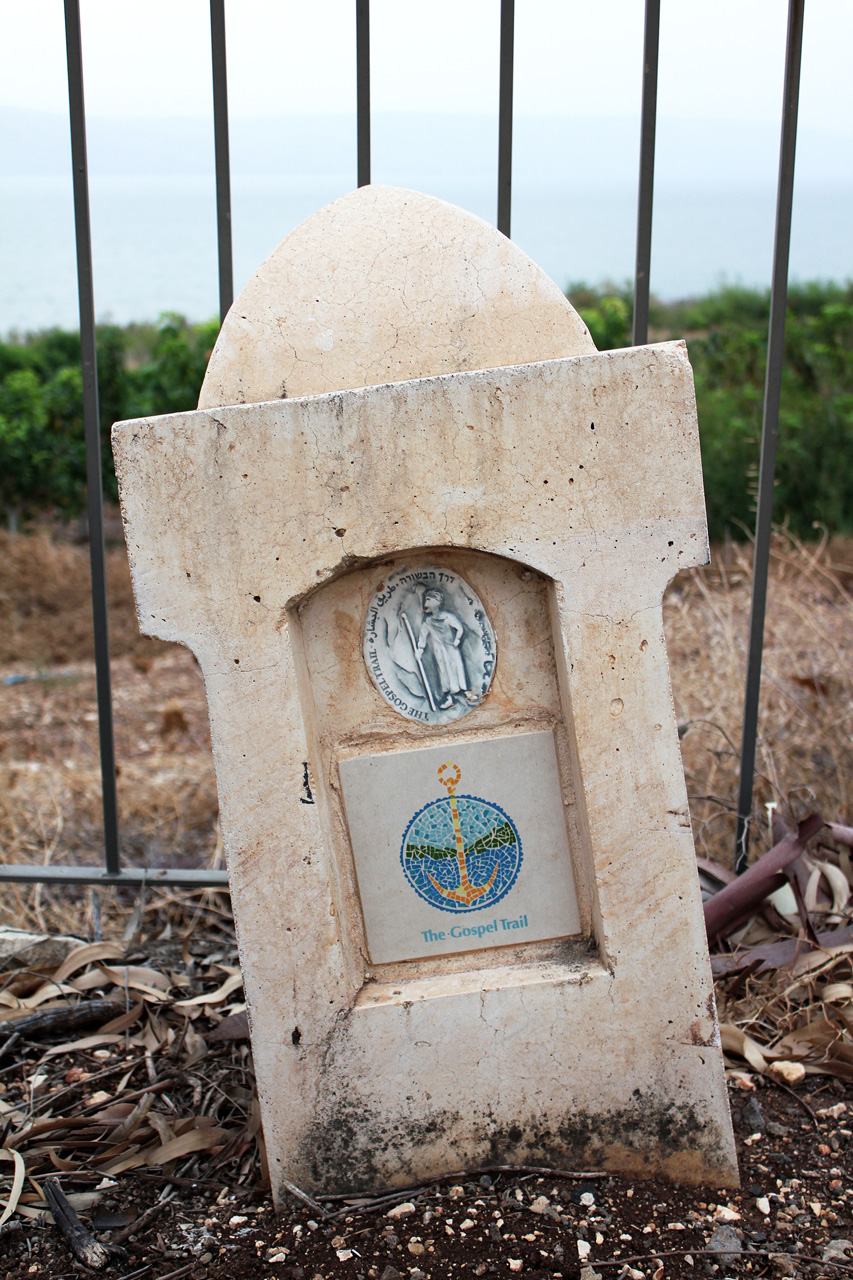 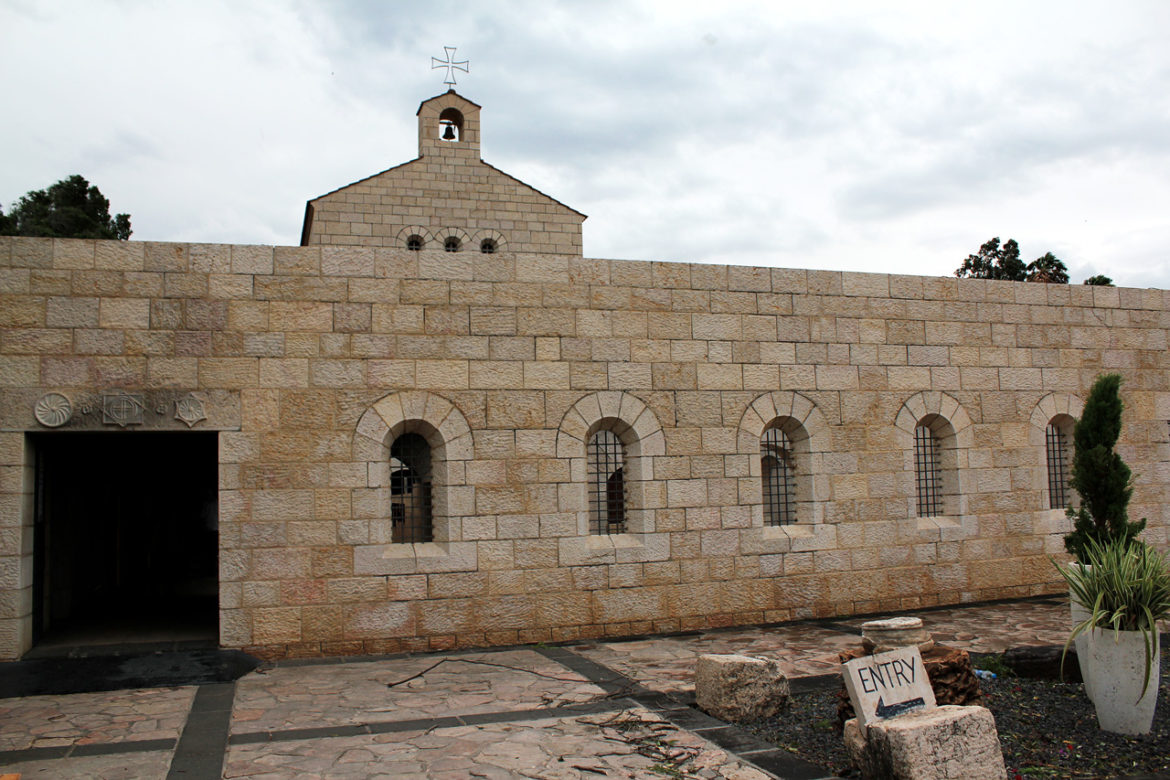 The Jesus Boat at Ginosar
From Tabgha we walked up to the main highway 90 and caught a bus to the kibbutz area of Ginosar. From here it was about a 1km flat walk towards the lake to find the Yigal Alon Museum (about 20 shekels to enter). An ancient boat from the first century was found preserved in the mud at Ginosar, on the waters edge of the Galilee. It is now housed in the museum under controlled conditions to preserve it. It is quite an amazing story- two local brothers, Moshe and Yuval were walking along the waters edge in a time when the Galilee was at a record low sea level. It was here that they found something in the mud and a huge operation started to excavate the boat from the mud without damaging it. You can read about the story at the museum, which is only metres from where the boat was originally found. The boat is dated back to the time of Jesus (hence the name, the Jesus Boat), which gives it the possibility that it could have been used by Jesus or his disciples during his time on earth. The kibbutz area where it is held, Ginosar, is also the location of the ancient town Gennesaret that Jesus visited. 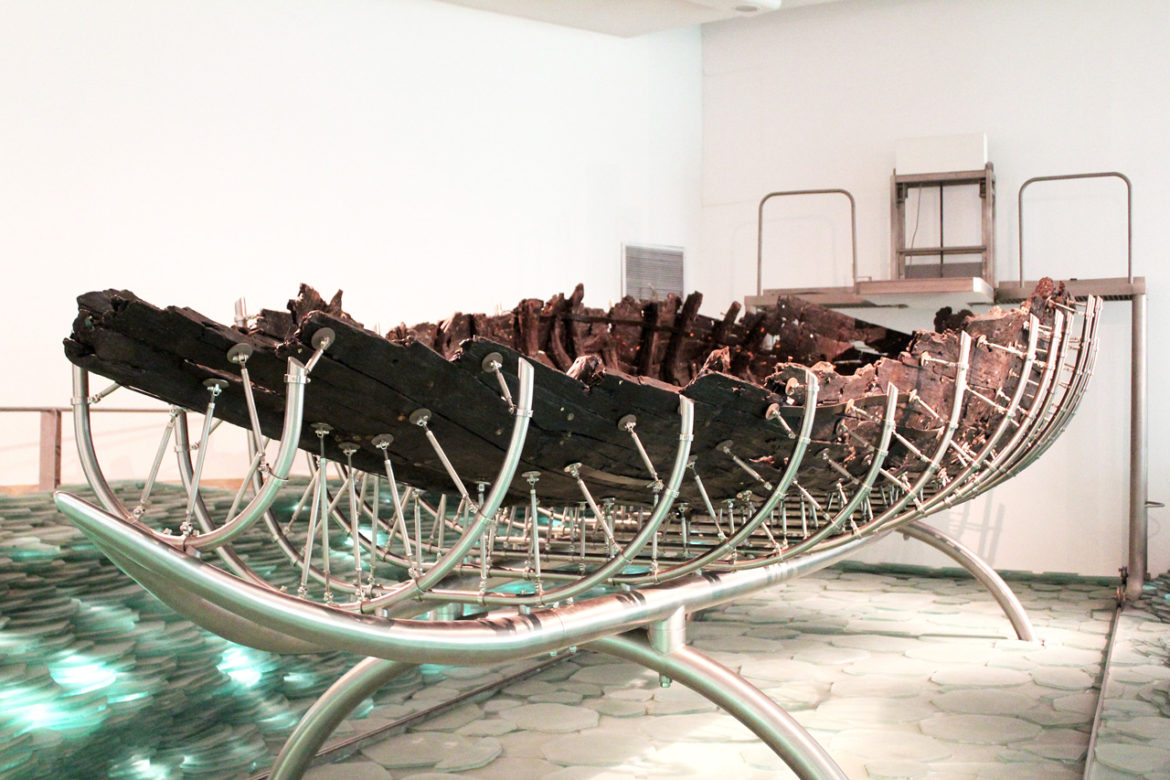 Tiberias
Tiberias itself isn’t as ancient as some of the other areas in the Galilee, but it does have an old citadel and city wall ruins. From the waterfront you can take a ride on an old wooden boat on the Galilee or wander along the promenade and visit the markets at night. At the southern end of the promenade lies the water level reader, a local icon in the shape of the Galilee. When we were there it read -212 metres below sea level. 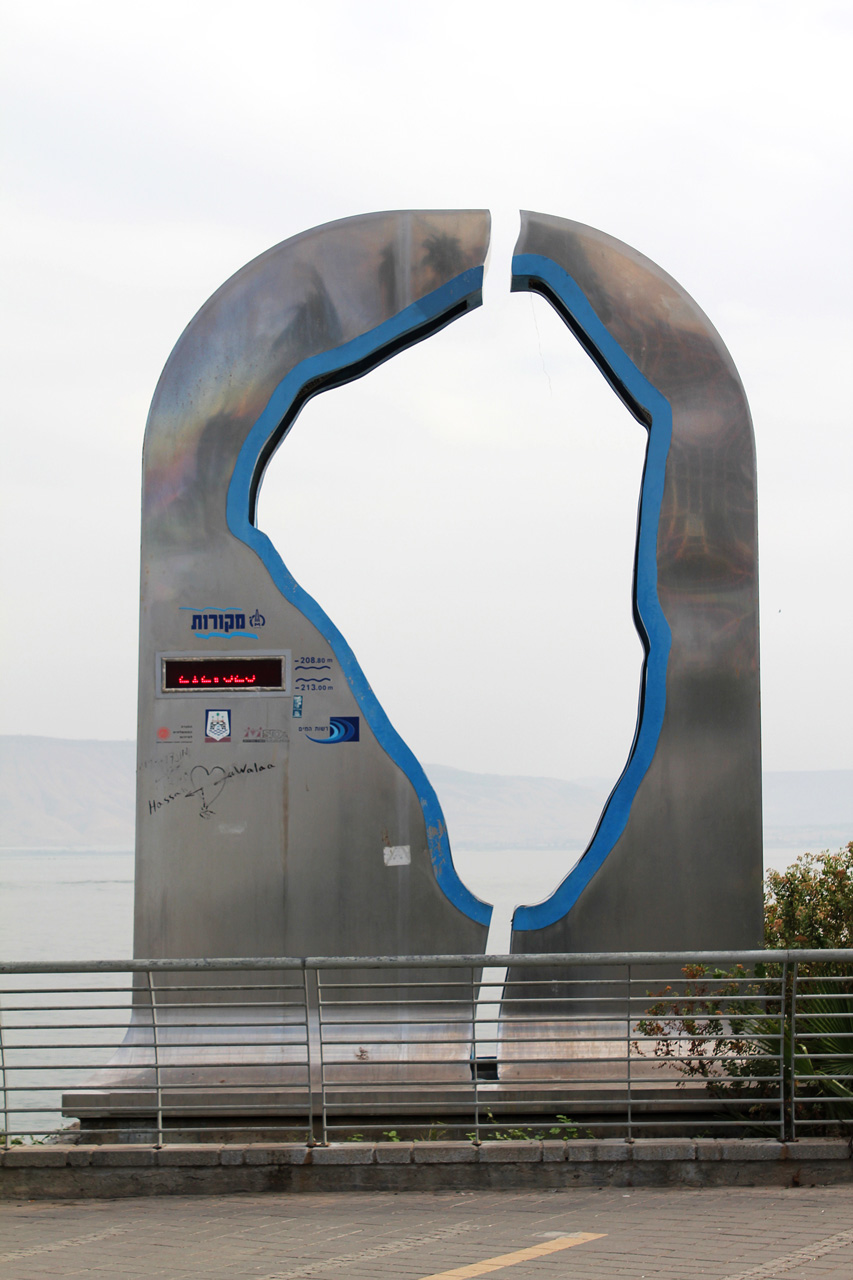 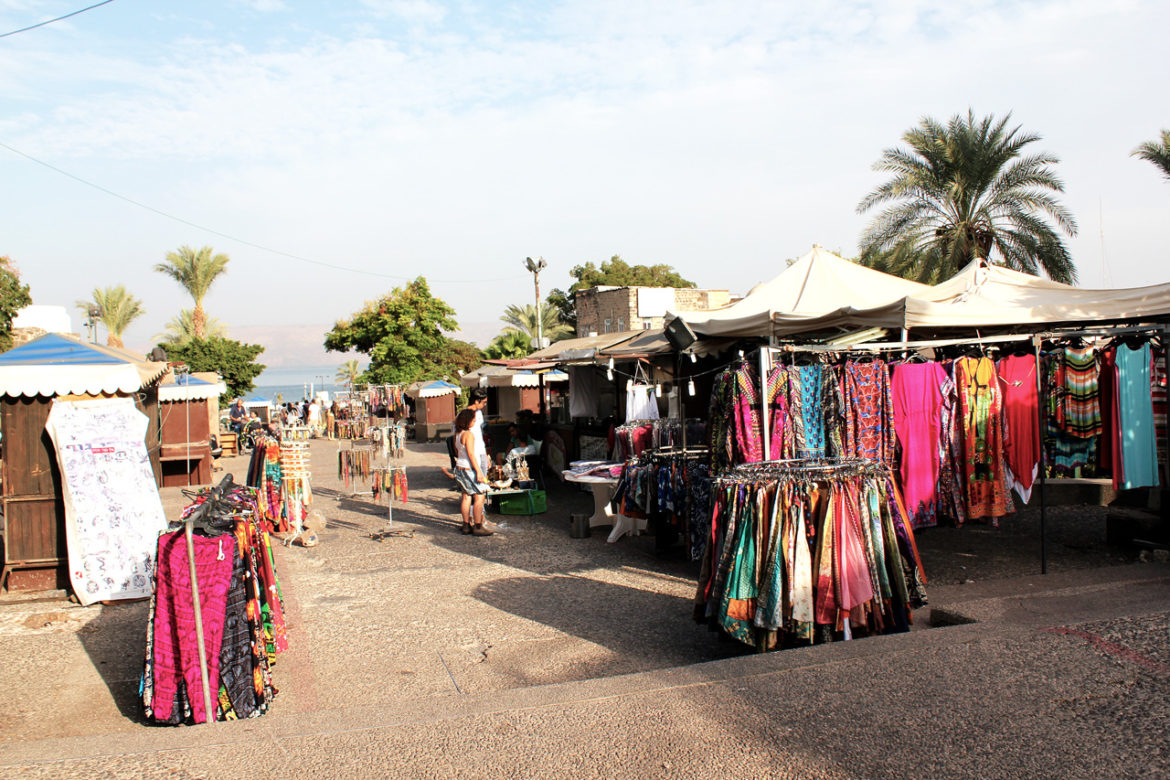 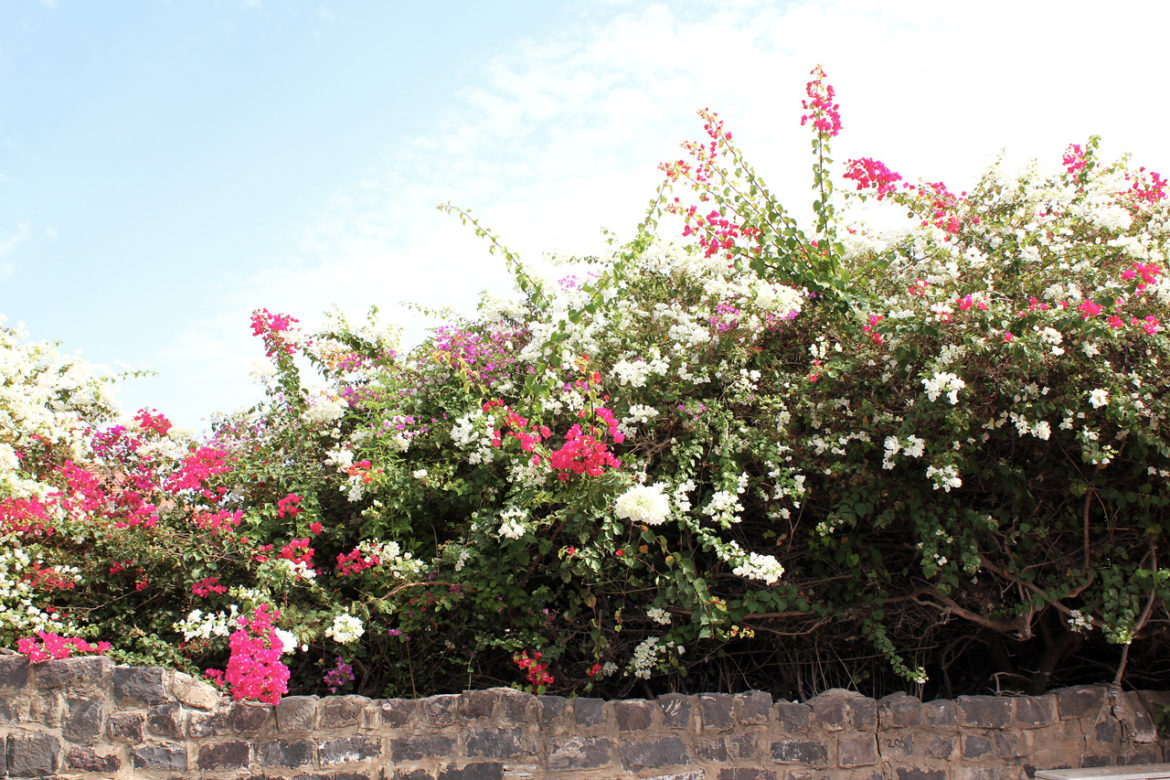 There are many restaurants and eateries (including a McDonalds) in Tiberias as well as a shopping centre slightly up the hill away from the water, called BIG Fashion Danilof. Just behind it on 335 St is a large supermarket with red and yellow signage. We didn’t find it until the end of our stay, but there is also a visitors’ centre in Tiberias, right next to the old city wall ruins. It is on the waterside of where the main road (hwy 90) forks.

There is a beach area just south of Tiberias that we went to and was quite popular, however it was also littered with rubbish. Later we heard that there are nicer beaches on the eastern side of the Galilee if you are able to get around to that side. You can’t visit the Galilee without being able to claim that you either rode in a boat or swam in it! 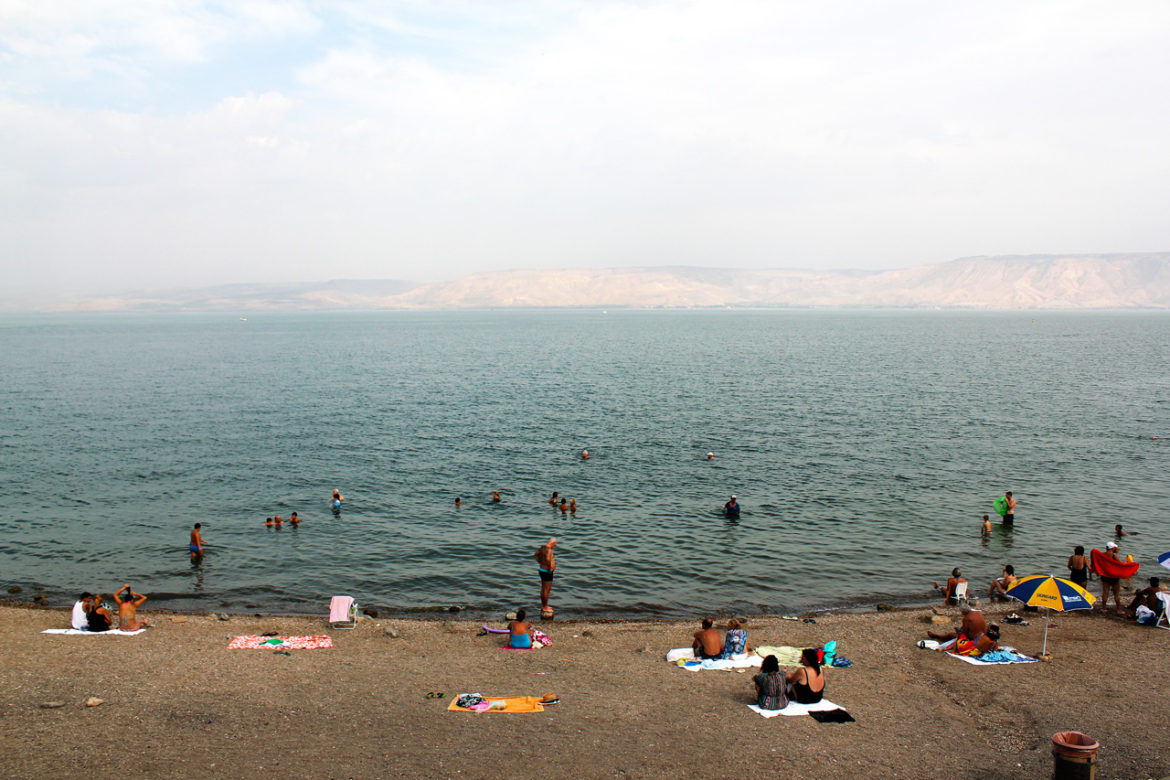 Other Sites and activities
There are many other sites around the Galilee worth visiting, such as Migdal (the town of Mary Magdeline), Chorazim (the town Jesus cursed), and many wineries in the nearby area. The Sea of Galilee is around a 60km circumference and is popular to bicycle around if you’re up for it! Many places in the town of Tiberias have bikes to hire, even hotels. This is a great site for the top Christian sites around the Galilee too.

The Galilee region is easy to get to via bus from Haifa or Jerusalem. Are you planning on visiting the Galilee? Let me know about it in the comments and if you have any more questions about visiting the area! 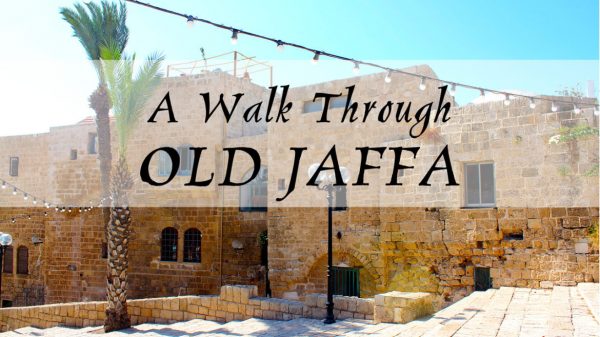 A Walk Through Old Jaffa 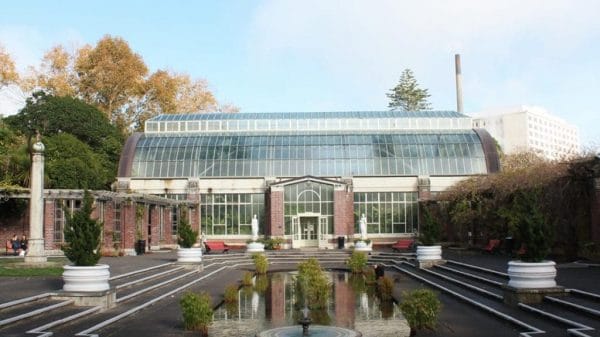